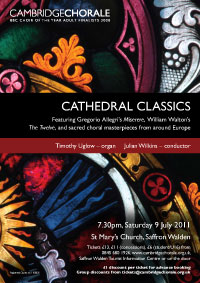 The stunning setting of St Mary’s Church, Saffron Walden will resound with the glorious combination of voices and organ, as Cambridge Chorale, joined by Timothy Uglow on the organ, celebrate European choral works as spectacular as the cathedrals where they are sung in worship.