We’ve recorded a number of CDs, which have been well received by the public and critics alike. Our recordings are listed below with track details and, for recent CDs, audio samples - and you can buy the CDs online, too.

From time to time we record our concerts; you can hear some excerpts from live concert performances using the player below, or find more on our SoundCloud page.

Hymns to the Mother of God 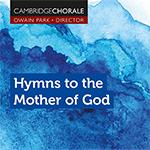 Join us on a musical journey from the Renaissance to the modern day in celebration of the Virgin Mary.

Featuring music by Tavener, Grieg, Victoria and Palestrina, alongside new works by exciting young composers Sarah Rimkus and Joanna Ward, there is sure to be something to suit all tastes. 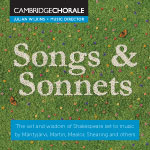 The wit and wisdom of Shakespeare, set to music by Mäntyjärvi, Martin, Mealor, Shearing and others.

This recording conveys the spirit of Christmas through an extraordinary range of musical style and language. From the traditional fare of Anglican carol services to contemporary music from the Dominican Republic, the mystery, magic and festivity of the season are all celebrated.

My Spirit Sang All Day

This recording was made at a public concert in West Road Concert Hall, Cambridge, and was released in December 2005. The programme includes Cambridge Chorale favourites such as the African folksong O-re-mi and O crux ave by Rihards Dubra. The CD ends with the fabulous double-choir Ave Maria by Franz Biebl.

Lovely, well-nuanced performances with a fine sense of style.

A round-the-world programme with something for everyone, sung with commitment and joy by a fresh-voiced young choir which does credit to Cambridge and to its expert and versatile conductor Julian Wilkins. [...] This is what a good community chamber choir should be about!

This CD has now sold out.

Devoted to the work of Rihards Dubra, Northern Lights features not only a selection of his choral motets (there is, incidentally, no duplication of material between this disc and Alpha-Omega), but also larger works for choir, marimba, saxophone and organ. 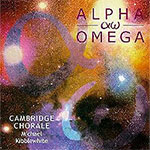 This recording was chosen by the critic Richard Baker as his CD Choice in the October 1997 issue of Classic FM Magazine, and was also reviewed in BBC Music Magazine.

This CD has now sold out.